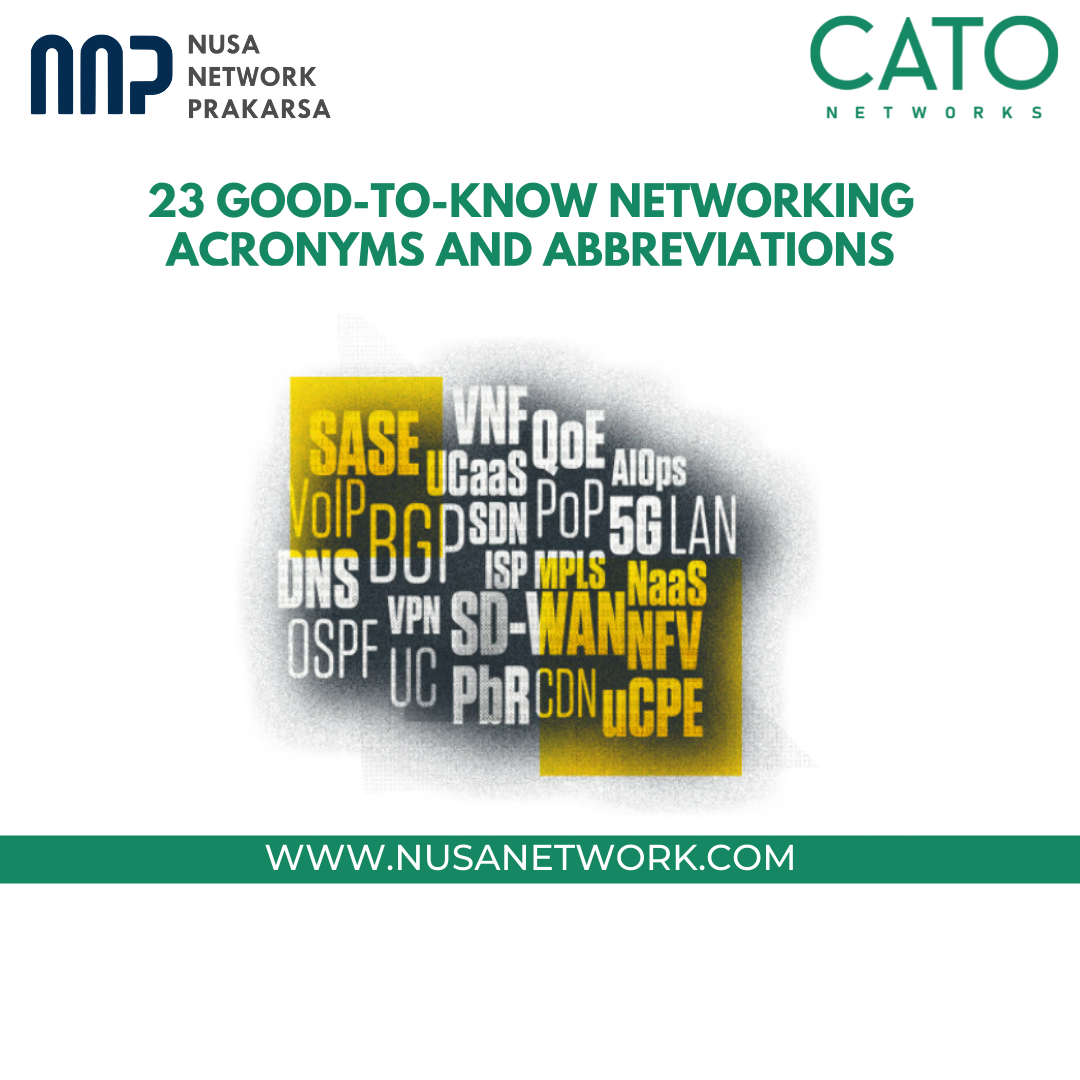 You probably know what WAN stands for, but what about all of the other acronyms and abbreviations in the networking world? Here’s a list of the key acronyms to help you keep up with the latest in WAN transformation.
SASE
Secure Access Service Edge converges network and security functionalities into a single cloud-based solution. SASE merges the network optimization capabilities of SD-WAN with a full security stack, including Next-Generation Firewall (NGFW), Secure Web Gateway (SWG), Zero Trust Network Access (ZTNA), and more.
SD-WAN
Software-Defined Wide Area Network is a virtual WAN architecture offering optimized traffic routing over multiple different media (broadband, MPLS, 5G/LTE, etc.).
MPLS
Multiprotocol Label Switching routes traffic over telecommunications networks using short path labels instead of longer network addresses. MPLS improves the performance and reliability of traffic flows.
PoP
A Point of Presence is an access point to a network, such as a SASE or SD-WAN appliance. Traffic can enter and exit these networks via a PoP.
VPN
Virtual Private Network solutions provide an encrypted link between a network and a remote user or network. Traffic sent over the VPN acts as if the remote device is directly connected to the network with full access to corporate resources.
UC
Unified Communications is the integration of corporate communications services, such as voice, messaging, videoconferencing, etc. UC creates a consistent user interface and experience across multiple communications media but requires a high-performance, reliable, and geographically distributed network.
UCaaS
Unified Communications as a Service is a cloud-based delivery model for UC. With SASE, UCaaS traffic is optimally routed to the UCaaS provider instance, and UC/UCaaS components connected to a SASE Cloud are protected against network attacks without requiring additional security solutions.
QoE
Quality of Experience measures how network performance impacts the end-user. QoE takes into account the fact that some performance issues may have a negligible impact on application performance while others render an application unusable.
PbR
Policy-based Routing routes network flows based on policies defined by a network administrator. It can provide priority to certain types of traffic or allow it to use more expensive routes, such as MPLS circuits. SD-WAN and SASE solutions offer PbR functionality.
5G
5th generation mobile networks are the most recent generation of cellular networks. They offer higher speeds and support higher densities of devices than previous generations.
AlOps
Artificial intelligence for IT operations uses machine learning and big data to improve IT operations. AIOps enables automated data processing, decision-making, and response for IT operations.
VoIP
Voice over IP enables voice communications over broadband Internet. Telephony data is encoded in network packets and sent over the Internet to its destination rather than traditional phone networks.
CDN
Content Delivery Network (CDN) is a geographically distributed network of servers that serve cached copies of web content. CDNs improve a website’s performance by moving the service closer to end-users.
NaaS
Network as a Service is a delivery model for cloud-based networking services. With NaaS, a company can deploy and manage its own networks using infrastructure maintained by its service provider.
ISP
Internet Service Providers provide their customers with access to the Internet. In addition to Internet access, ISPs may also offer other services, such as email, web hosting, and domain registration.
uCPE
Universal Customer Premises Equipment is a general-purpose off-the-shelf server, including compute, storage, and networking. uCPE provides network and security services using network function virtualization.
NFV
Network Function Virtualization provides network functions using virtualized services rather than dedicated appliances.
BGP
The Border Gateway Protocol is a protocol for exchanging routing information between different autonomous systems (ASes) on the Internet. Each AS advertises which IP addresses it can route traffic to, helping traffic move from its source AS to the AS closest to its destination.
SDN
Software-Defined Networks decouple the control plane from the forwarding plane. The network is defined and managed in software, making it more flexible and adaptable. SD-WAN and SASE are examples of SDN applied to the corporate WAN.
LAN
Local Area Networks link computers together within an organization. A LAN is connected to the Internet via one or more ISPs.
OSPF
The Open Shortest Path First protocol is designed to route traffic within an AS. It uses Dijkstra’s algorithm to find the shortest route to its destination, minimizing the distance that the traffic needs to travel and hopefully the latency as well.
DNS
The Domain Name Service is the “address book” of the Internet. DNS servers translate domain names (like catonetworks.com) to the IP addresses used by computers to route traffic.
Source
www.catonetworks.com
Share this post